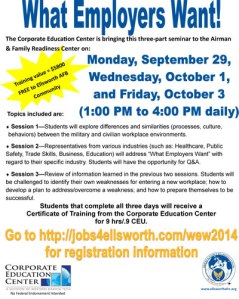 The Corporate Education Center from Western Dakota Tech will be offering a What Employers Want Seminar here at the Ellsworth AFB Airman & Family Readiness Center.

Attendance is FREE to all Ellsworth AFB community members.

The seminar consists of three sessions, each lasting three hours. The dates are:

Visit http://jobs4ellsworth.com/wew2014/ for more information and to learn how to register.

Deadline for registration is Wednesday, 24 September at 4 PM!

Are you currently looking for a job in the local area?

We will have employers that have open positions and are looking to fill them! Get your resume in order, dress for success and be here at the Airman & Family Readiness Center this Wednesday, 3 September between 3PM and 4:30PM. 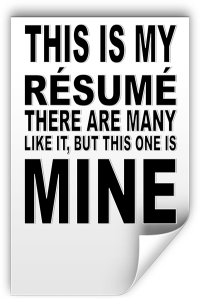 This is my résumé. There are many like it, but this one is mine.

My résumé, without me, is useless. Without my résumé, I am useless. I must use it to write my future true. I must write truer than the other job seekers who are trying to take the open jobs. I must get a job before they do. I will…

My résumé and I know that what counts in the job search is not the number of résumés we write, the noise of our interview, nor the references we have. We know that it is the job offers that count. We will get job offers…

I swear this creed. My résumé and I are the defenders of my future. We are the masters of my destiny. We are the saviors of my financial future.

So be it, until employment is secured, and there is no uncertainty, but my final retirement!

If you have ever found yourself saying “I can’t find the right…(whatever it is that you are looking for, career, man, woman, etc.) then this article is for you. Read the response that, Dirty Jobs star, Mike Rowe, gave to a fan that asked him for advice on finding the “right career”:

I’ve spent this last year trying to figure out the right career for myself and I still can’t figure out what to do. I have always been a hands on kind of guy and a go-getter. I could never be an office worker. I need change, excitement, and adventure in my life, but where the pay is steady. I grew up in construction and my first job was a restoration project. I love everything outdoors. I play music for extra money. I like trying pretty much everything, but get bored very easily. I want a career that will always keep me happy, but can allow me to have a family and get some time to travel. I figure if anyone knows jobs its you so I was wondering your thoughts on this if you ever get the time! Thank you!

Read Mike’s response on {Life}Buzz.com by following this link: http://www.lifebuzz.com/mike-rowe/

Polish up your resume, dress for success, and join us on Wednesday, 23 April from 3:00 PM to 4:30 PM here in the classroom at the Airman & Family Readiness Center to meet with employers that are currently hiring.

For a list of employers that have committed to being here, visit: http://jobs4ellsworth.com/mte. We have provided links to their websites so that you can research them and be prepared for your networking opportunity with them (Hint, Hint!).

On Wednesday, December 11th, Air Force leaders  announced force management programs designed to reduce the force by thousands of Airmen over the next five years as a result of sequestration. They also announced that the Air Force will reduce the size of its civilian workforce by about 900 positions in addition to maintaining approximately 7,000 vacancies across the force to meet the demands of a constrained fiscal 2014 budget.

Fiscal 2014 force management initiatives for active duty members are in addition to the announcement made in July, stating the Air Force will implement several force management programs to meet budget reduction requirements.

WHAT DOES THIS MEAN FOR THE ACTIVE DUTY MEMBER?

PLAN AHEAD! Air Force leaders made the decision to announce the overall strategic plan now so that Airmen have the necessary time to consider all their career options.

The Transition Assistance Program has been redesigned into a comprehensive, mandatory program through the efforts of an interagency team from the Department of Defense, Department of Veterans Affairs, Department of Labor, Department of Education, Department of Homeland Security, Office of Personnel Management and the Small Business Administration.

The redesigned TAP, known as Transition Goals Plans Success, or Transition GPS, changes the current program from a discontinuous set of activities into a cohesive modular, outcome based program that provides opportunities and aids a successful transition into a “career ready” civilian. Transition GPS bolsters and standardizes the transition services that service members receive prior to separating from the military to make them employment ready as well as being prepared to enter into higher education, attend career technical training, or start their own business.

Basically, with a few exceptions, the Transition Process has become mandatory for Active Duty members. These mandatory portions include the Pre-Separation Counseling Briefing, Transition GPS Workshop, and a Capstone Appointment to be completed before you final out-process the base.

If you are separating, you can start the process as early as 12 months before your planned separation. Retirees can start 24 months prior. If you are notified that you may be separated involuntarily (MEB, administrative, or judicial), you need to schedule a Pre-Separation Counseling Briefing ASAP.

The Pre-Separation Counseling Briefing, in which you complete a DD Form 2648, does NOT lock you into separating if you change your mind or the MEB/Admin/Judicial process does not go through. However, you will not be allowed to attend a Transition GPS Workshop until it has been completed. If you do not meet the mandatory parts or the Transition Process, you may not be able to utilize permissive TDY or terminal leave until your process has been completed.

Visit our Transition Assistance page for more information on the process. You can also look at our Transition Briefing/Workshop Calendar for future dates of transition activities.

WHAT DOES THIS MEAN FOR THE CIVILIAN WORKFORCE?

We have been through this before and unless you have worked as a civilian for less than a year you know how frustrating the process and lack of information was.

PLAN AHEAD! Prepare your finances and employability

Join Veteran Recruiting July 30th (1-4pm EST) for the Thank You for Your Service virtual career fair http://www.veteranrecruiting.com/ great companies and chance to win an iPad.