Starting on Monday, April 15th, the Airman & Family Readiness Center will be open from 8:00 AM to 4:00 PM, Monday through Friday (excluding Federal Holidays and most down days). 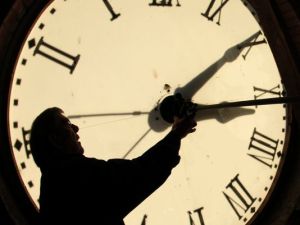 Don’t forget to set your clocks ahead 1 hour before you go to be on Saturday evening. Sunday, March 10th at 2 a.m. is the start of daylight saving time, which means all of sleep-deprived America loses one precious hour of shut-eye.

It’s the most fussed-about hour of the year. For many, the disruption is torture.

About 61% of Americans say changing the clocks has an effect on them, and 40% say it takes them at least one week to get back to normal, according to a recent survey by the Better Sleep Council, a mattress industry group.

“That one hour doesn’t have as dramatic of an effect as people think,” says David Volpi, founder and medical director of Eos Sleep, a center for treatment of snoring and sleep apnea. “I think people use that as an excuse. It’s only an hour. It’s not like you are dealing with jet lag.”

On the other hand, sleep educator Nancy Rothstein says the small shift makes a huge difference. “Our body clock is a natural thing. Changing the clock is not natural. It’s a man-made thing that forces changes on us,” Rothstein says. “People have enough trouble with their sleep as it is. Seventy-six percent of Americans want a better night of sleep.”

And on a Monday morning? That’s rough.

According to a survey from Sleepy’s, the mattress retailer, nearly 70% of Americans would favor moving the time change from 2 a.m. Sunday to 2 a.m. Saturday.

Sleepy’s even has a link on Facebook for sleep devotees to sign a petition urging lawmakers to officially change the day. The petition says the shift would soften the Monday morning clock shock that many will feel after springing forward.

But not everyone is bummed.

“My wife and I are walkers in the evening after work, and the dark takes the fun right out of it,” Alfred says. “We usually hit the sidewalks at 6 or 6:30 and it’s already dark. To us it means spring’s coming.”

Alfred is not alone.

“I look forward to it every year,” says Phaedra Steele, 44, of Orlando. “I feel alive when there is more daylight. We live on a lake and it allows us time to paddle board.”

One thing is certain: You have to remember to change your clocks. Otherwise, your sleep-deprived boss might not be so happy.

That’s right, coming this Sunday you can be the proud owner of an absolutely FREE, extra hour of sleep.

This Sunday morning, November 4, 2018 at 2 a.m., daylight savings time will end and the clocks in most states will turn back 1 hour.

Daylight savings time is not observed in Hawaii or in most of Arizona, although the Navajo Nation does observe it, but it is observed in all other states.

1. On Saturday night, turn back your clocks by 1 hour.
2. Go to bed
3. Wake up on Sunday with one extra hour of sleep

This offer is limited to no one! But hurry!
This offer expires on Sunday, March 10, 2019
when the clocks spring forward 1 hour!

If you think you never have enough time on the weekends, you definitely are not going to like this weekend. It’s Daylight Saving Time again, and this isn’t the fun one as we turn the clocks forward an hour.

The official change of time begins at 2 A.M.  on the morning of Sunday, March 11th, 2018. Be sure to set your clocks ahead by 1 hour before you go to bed on Saturday Night.

Daylight saving time is currently adopted in over 70 countries and imposes a twice yearly 1 hour change in local clock time. Many assume that the time change only affects your sleep pattern that night, but a study out of England suggests that the seemingly small one-hour shift in the sleep cycle can affect sleep for up to a week. In my opinion, I know I didn’t need a study to tell me that.

Either way you see it, don’t forget to turn your clocks forward one hour so that you aren’t late for anything on Sunday!

That’s right, coming this Sunday you can be the proud owner of an absolutely FREE, extra hour of sleep.

This Sunday morning, November 5, 2017 at 2 a.m., daylight savings time will end and the clocks in most states will turn back 1 hour.

1. On Saturday night, turn back your clocks by 1 hour.
2. Go to bed
3. Wake up on Sunday with one extra hour of sleep

This offer is limited to no one! But hurry!
This offer expires on Sunday, March 11, 2018
when the clocks spring forward 1 hour!

This event is hosted by the 28 FSS Airman and Family Readiness Flight and Child and Youth Services Flight.